The first gallery activities in Zlín were started on April 26, 1936 with the opening of the first of the total of eleven Zlín Salons, organized by the Baťa Company. The salons were then held annually until 1948. Regular purchases of works of art from these rare shows of contemporary Czechoslovak or Czech (1939–1944) fine arts were part of the programmatic building of an art gallery in Zlín. The expansion of the Baťa company, founded shortly before the turn of the century in 1894, was therefore related not only to the history of the city of Zlín and to footwear industry, but also to a variety of cultural activities, including fine arts and architecture. And it is the architecture and urbanism of Zlín, which as global phenomena represent the starting point of the permanent exhibition of the Regional Gallery of Fine Arts in Zlín, located on the second floor of Building 14 of the 14|15 BATA INSTITUTE. Its visitors will familiarize themselves with the visual culture of Baťa's Zlín and with the reasons the Baťas had to intervene in cultural life.

Once the company owners realized that the company's advertising was in need of good graphic artists, they founded an art school, started purchasing works of art, surrounded themselves by the best people, and established a tradition of the Zlín Art Salons. Within a few years, the company managed to purchase a number of works of art that became the basis of the gallery's permanent collection. The regional gallery, founded in 1953, has with its collecting activities been continuing the successful tradition until today. Until 2012, due to limited space and budget, the gallery did not have an opportunity to create a representative exhibition of all its works of art. However, the founding of the 14|15 BATA  INSTITUTE with its generous exhibition concept considerably improves the situation. 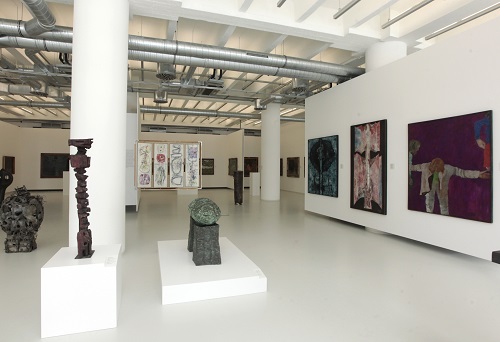 The new facilities in Building 14 provide suitable space for the exhibiting of older works of art or of articles of extraordinary value, which need to be exhibited under special conditions; this was not possible in the past. However, the biggest improvements for visitors include better accessibility, availability of additional services, and generally more pleasant environment. The permanent collections of the Regional Gallery of Fine Arts in Zlín include wonderful works by Czech artist of the first half of the 20th century, including Alfons Mucha, Emil Filla, Bohumil Kubišta, Václav Špála, Josef Čapek, Jan Zrzavý, Jindřich Štyrský, Toyen, Otto Gutfreund, or Vincenc Makovský. As a result, the Zlín gallery is offering a comprehensive collection of Czech art of the 20th century.

The non-permanent part of the exhibition called Orders of Vision is putting works from the 20th century side by side with art of the 19th and 21st centuries. Inspired by local architecture, authors of the exposition did not forget about Czechoslovak industrial design, which is said to have been born in Zlín.

You can refuse consent at any time.